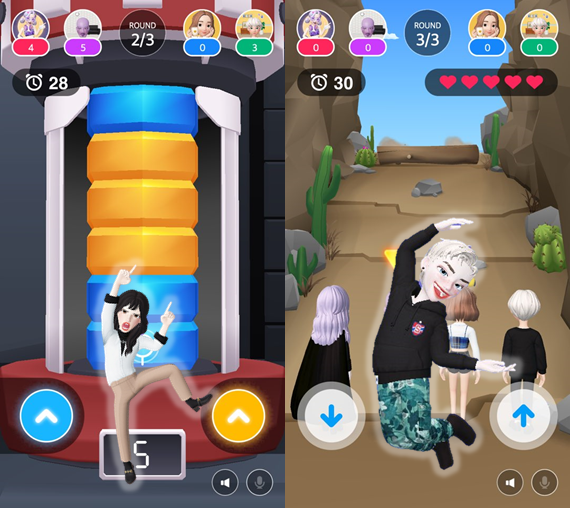 Shoot the Blocks & Avoid the Logs

Touch fast, and avoid accurately! The Party Game we'll introduce you this time are : 'Shoot the Blocks' - Shooting the downwarding blocks and 'Avoid the Rolling Logs' - Dodging the logs rolling towards you.

'Shoot the Blocks' Game needs your fast tapping skills and judgement. Shoot the blue, yellow blocks on each colors. The more you shoot, the higher points you'll get! If you do not tap the same-colored block with your fingers, you won't be able to tap for a few seconds. So better keep your eyes on, and tap carefully!

In 'Avoid the Rolling Logs' Game, logs will be rolling towards you. Be careful not to hurt your ZEPETO! You have total 5 chances. Tap 'UP' or 'DOWN' button to move! Dodge the logs carefully, and become the champion among 4!